Style to Make You Smile

My high school English teacher loved to say “Style is the man.” When we read Shakespeare or any of the great writers and poets, she would look longingly skyward and utter that phrase, hoping our adolescent brains could understand it. Happily, after, ahem, a few decades past 12th grade, the new Audi Q8 helps me (finally) get the phrase’s meaning. 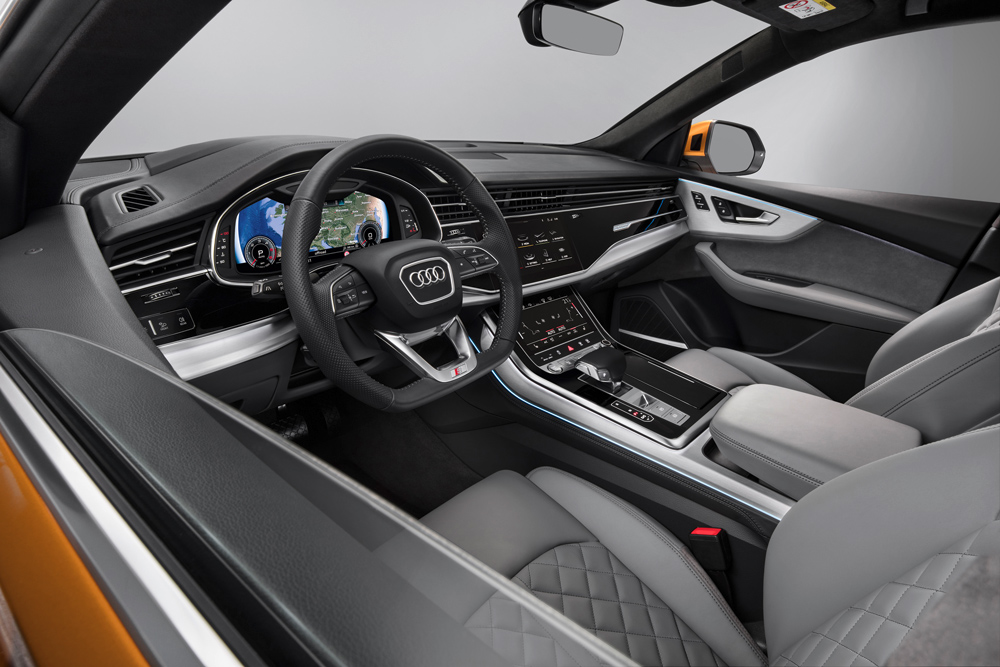 You Look Marvelous — The Q8’s interior features a sleek MMI touch response display and can comfortably seat up to five passengers.

The new Audi Q8 is all about style. And style really is the point. It’s a fashion magazine cover star, not a back-of-the-issue story in Popular Mechanics. The first thing you’ll notice is its sexy front grill: the pre- cursor, according to Audi, of the brand’s future look.

Next is its aggressive stance due in large part to bulging wheel wells and a tapering, coupe-like roofline. Those wheels, by the way, break new ground (pun intended) when it comes to their size: a very in-your-face 21 inches in diameter can be factory installed. They appear even more substantial because — compared to its sibling, the highly regarded Q7 — the Q8 is a couple of inches shorter. That means it will carry fewer passengers (five vs. seven in the Q7). But unless you regularly have to haul a passel of passengers — think office car pool or after-school soccer practice taxi — you’ll seldom miss the Q7’s third row of seats. You will, however, love the new Q8’s sharp (dare I say, fashionable) good looks. I think it will easily pass the “look back and smile after I park it” test. For some, that’s reason enough to give the Q8 their consideration.

Audi says this new SUV’s exterior design is based on an interesting and important car, the Ur-Quattro — Ur, in German means “first.” This “first Quattro” was devised by the top people at Audi to be a world-beater. It was Ferdinand Piëch, the grandson of Dr. Porsche, who dared Audi’s elite engineers to build something that would be their personal dream car. It had to be better handling, sharper looking and, above all, soul stirring. The result was the first Audi Quattro.

Powerful, blessed with all-wheel drive and superior road holding, it was this platform that demonstrated to the professional rally world that rear-wheel drive was yesterday’s news. In fact, rally great and two-time World Rally Champion Walter Röhrl told me that after he drove the Audi, he firmly believed all-wheel drive was vastly superior and all cars, road or track, should be so equipped. He then demonstrated his thoughts on the subject as we rocketed up France’s Col de Turini in an all-wheel-drive car. Lesson learned! 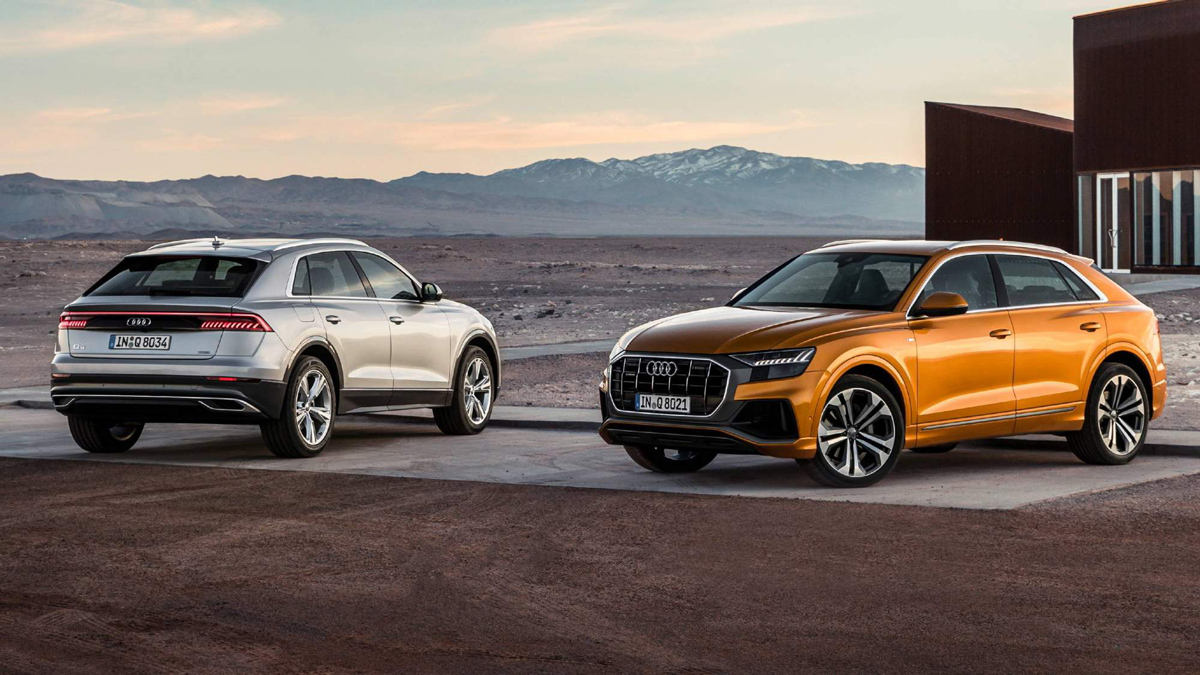 Style But With Substance — The Audi Q8 comes available in a variety of colors, including floret silver and dragon orange.

The new Q8 pays homage to that original Ur-Quattro design with a sloping rear roof and shorter, more nimble body. Its good looks go more than skin deep, however. Under the sexy sheet metal beats the heart of an athlete. Of course, the proven and practically unbeatable quattro all-wheel drive is standard. Engineered with a purely mechanical center differential, it seamlessly transfers power to the front and rear axles at a standard ratio of 40 percent front and 60 percent rear. When encountering slippery road conditions, the system can transfer the majority of the power to the axle with better traction.

The Q8 comes standard equipped with an adaptive damping suspension. This means you can adjust the performance of the springs and shock absorbers to match the terrain or your preferred driving style. Also available is a more sophisticated adaptive air suspension that enables the chassis to be raised by as much as 10 inches of ground clearance, making the Q8 a capable choice for ventures off-road. It’s important to note that with the optional air suspension system, the Q8 benefits from the addition of Audi’s performance-enhancing rear- wheel-steering magic. This makes the Q8 handle more stably at higher speeds and more nimbly in tight, low-speed maneuvers and parallel parking. The engineering behind the system is highly complex, but since the technology works without your intervention, all you have to do is enjoy the added stability and driving enjoyment.

Today, turbo charging is how well-engineered vehicles can deliver better fuel efficiency without sacrificing horsepower and torque. When coupled to a properly engineered transmission, turbo-charged vehicles with several hundred horsepower can sip fuel like (and in many cases better than) many underpowered, cramped, noisy and uncomfortable economy cars did just a few years ago.

The Q8’s precise EPA fuel efficiency has yet to be estimated, but you can expect combined fuel mileage from the 335-hp turbocharged 3.0-liter V-6 to be in the low 20 mpg range with high 20 mpg possible on the highway.

By the way, the Q8 has an intriguing bit of technology that, at least in the USA, is more geared for the future. It’s a 48-volt hybrid electric system that, in countries other than the States, will allow the engine to shut off when the Q8 is cruising. Right now, we in the USA will see it used only for the stop/start system. Expect more news on this in the future as electric vehicles become more mainstream. The Q8’s standard 8-speed automatic transmission ensures that your engine is always in the right gear for every driving condition. It selects top gears for maximum freeway fuel mileage and leisurely cruising. It downshifts to lower gears for accelerating quickly around town or hustling onto a highway entrance ramp. And Audi hasn’t sacrificed performance for style. Q8 drivers can expect sub six-second zero-to-60 times, so driving a sexy SUV doesn’t disqualify you from the cut-and-thrust fun of the stoplight grand prix! Shhhh!

Although Audi effuses about the Q8’s exhilarating new exterior design, drivers and passengers live inside the vehicle. You will be happy to hear that the new Q8’s interior is no penalty box. Far from it. The designers spent as much effort to make the interior enjoyable as they did getting the exterior just right. While the Q8 is shorter than the Q7, it is wider and lower and so, despite the shorter body, still offers a spacious interior. It has standard seating for up to five passengers and generous cargo space for luggage. (Yes, your golf foursome with pro bags can hit the links in Audi Q8 style.) Car and Driver wrote in its article at the press introduction that the Q8’s interior was more “handsome by some margin” than those of its two primary German segment competitors, pointing out that the rear-seat passengers will “feel as if they have space to stretch out, with more than ample leg and headroom.” Naturally, the seating surfaces and side panels are covered in high-quality leather, no surprise for an Audi in this class.

For the driver, the central element in- side the cabin is the all-new MMI touch response display. It has a black-panel look that dissolves into a large black inlay when switched off — think shiny Steinway piano gloss — creating a tranquil interior environment. Audi says that all of the esthetic design elements relate logically to one another. From the flat air vent strip to the wide center console leading to the tiptronic selector, it’s all harmonious and pleasing to the eye. The company is so proud of the swoop and contour of the interior that there’s an optional lighting package which in the dark traces the design lines of the interior and provides backlight for the three-dimensional quattro badge above the glove compartment. That option is, of course, your call! 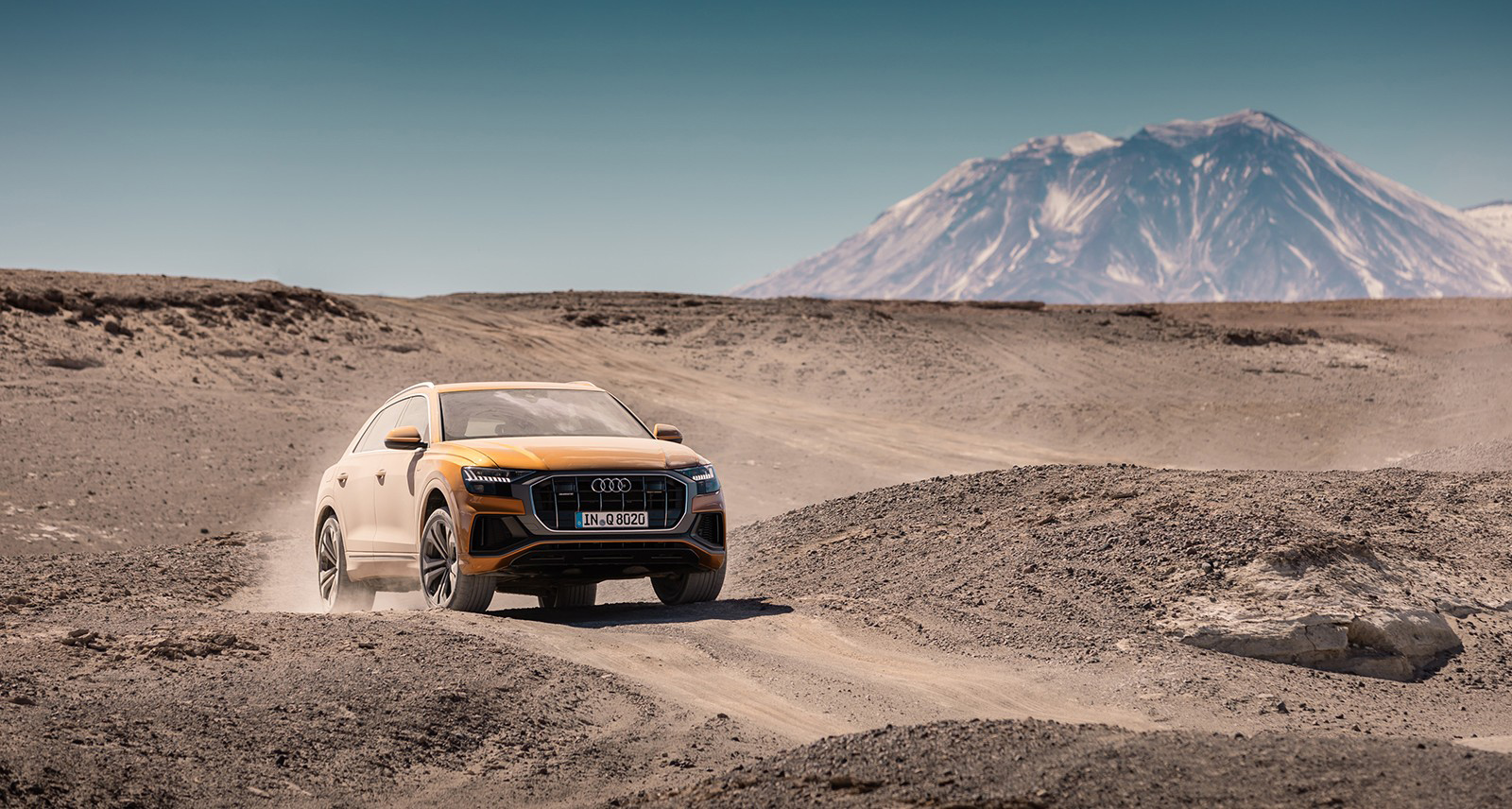 Intuitive Operation— The Q8 can traverse all types of road conditions, thanks to its standard equipped adaptive damping suspension.

When testing press vehicles with modern entertainment systems, I often get frustrated by how difficult and proprietary their interfaces have become. Maybe Audi has heard my carping because the Q8’s MMI infotainment operating system is as intuitive to use as a smartphone. Like the device currently in your pocket, you’ll hear and feel a click when your finger triggers a function. Audi claims that its logical and flat menu structure allows fast access to various vehicle functions. As with smartphones, the Q8’s system can be personalized using configurable and movable “favorites” buttons. Audi even incorporated “Natural-language” controls that turn the Q8 into a more intelligent travel assistant. For example, you can tell the system “I’m hungry” and the Q8 will suggest neighboring restaurants.

Speaking of smartphones, the Q8 has Audi’s phone box, a system that enables wireless charging for compatible smartphones. Plus, if your smartphone is load- ed with your favorite tunes (or podcasts), the Bang & Olufsen 3D Advanced Sound System is said to deliver an impressive, lifelike musical experience.

The Q8 is scheduled for a fall 2018 release in the USA, making its debut as a 2019 model. However, several car magazines have driven it at the press launch in South America and have come away impressed. Motor Trend said in its June review, “...the adaptive air suspension and four-wheel steering, stood out on... twisty dirt roads. The Q8 feels quite stable on tight corners, and the well-balanced steering provides good road feedback. The peppy engine doesn’t disappoint.” Car and Driver agrees: “... on narrow Chilean desert roads, the broad-of-beam Q8 felt unnaturally nimble...it manages curving roads with little drama and respectable pace.” Finally, the British magazine Car proclaimed: “...the Q8 is surprisingly sharp to drive... comfort levels are excellent and the cabin puts older rivals...to shame.”

Since Audi hasn’t posted a manufacturer’s list price yet, we can only speculate that the Q8 — as Audi’s SUV flagship — will sticker somewhere close to the price of a Q7. The Premium Q7 V6 starts at $56,400 and climbs to $65,400 for the Prestige model (options not included). We will just have to wait as the leaves turn to get the final numbers, but based on the rave reviews the Q8 has already received, a fall visit to your favorite Audi dealer (and you know who that is) may be in order.