“You don’t have to dig very deep to become convinced that Québec City is the most romantic city in North America.” –Travel + Leisure

With its winding cobblestone streets, myriad shops, and delightful cafés, restaurants and hotels, French-speaking Québec City (English is also widely spoken) welcomes travelers from all over the world, especially those with a taste for the finer things in life. Located on the majestic St. Lawrence River and Cap Diamant (“Cape Diamond”), the city was founded in 1608 by Samuel de Champlain and is considered the birthplace of French Canada. As such, it has a distinctly effervescent “Québécois” flavor that is mostly French and uniquely Canadian, a land that is as vast as “Old” Québec is compact. This is one of the world’s greatest cities and also one of its friendliest, making it the perfect destination for a long, romantic weekend or an even longer getaway.

As for dining and accommodations, the historic district of Old Québec stands out from the crowd. Designated a UNESCO World Heritage Site in 1985, Old Québec actually consists of two distinct neighborhoods — Lower Town and Upper Town — and is perhaps best known for its stone ramparts, which were originally built to withstand attacks from the British and then later refortified by the British after they defeated the French in the Battle of the Plains of Abraham in 1759. Indeed, Old Québec is the only walled and fortified city in North America north of Mexico, making it a must-see for history buffs.

Although there is plenty to see in this four-season capital, sturdy walking shoes are necessary to navigate the sometimes hilly streets, especially in Upper Town, where the castle-like Fairmont Le Château Frontenac dominates the landscape. Built in 1893 on a cliff overlooking the St. Lawrence River, this is one of the world’s most beautiful hotels and is a destination in itself, offering luxurious suites and rooms as well as an array of upscale shops and restaurants. From the Frontenac, many of Upper Town’s best sites can be explored on foot, including its military fortifications, the Cathedral-Basilica of Notre-Dame de Québec and Rue du Trésor, a picturesque alley where local artists sell and display their wares. Also not to be missed is the famous promenade, Terrasse Dufferin, which borders the hotel and where visitors and street musicians converge throughout the day and into the night. 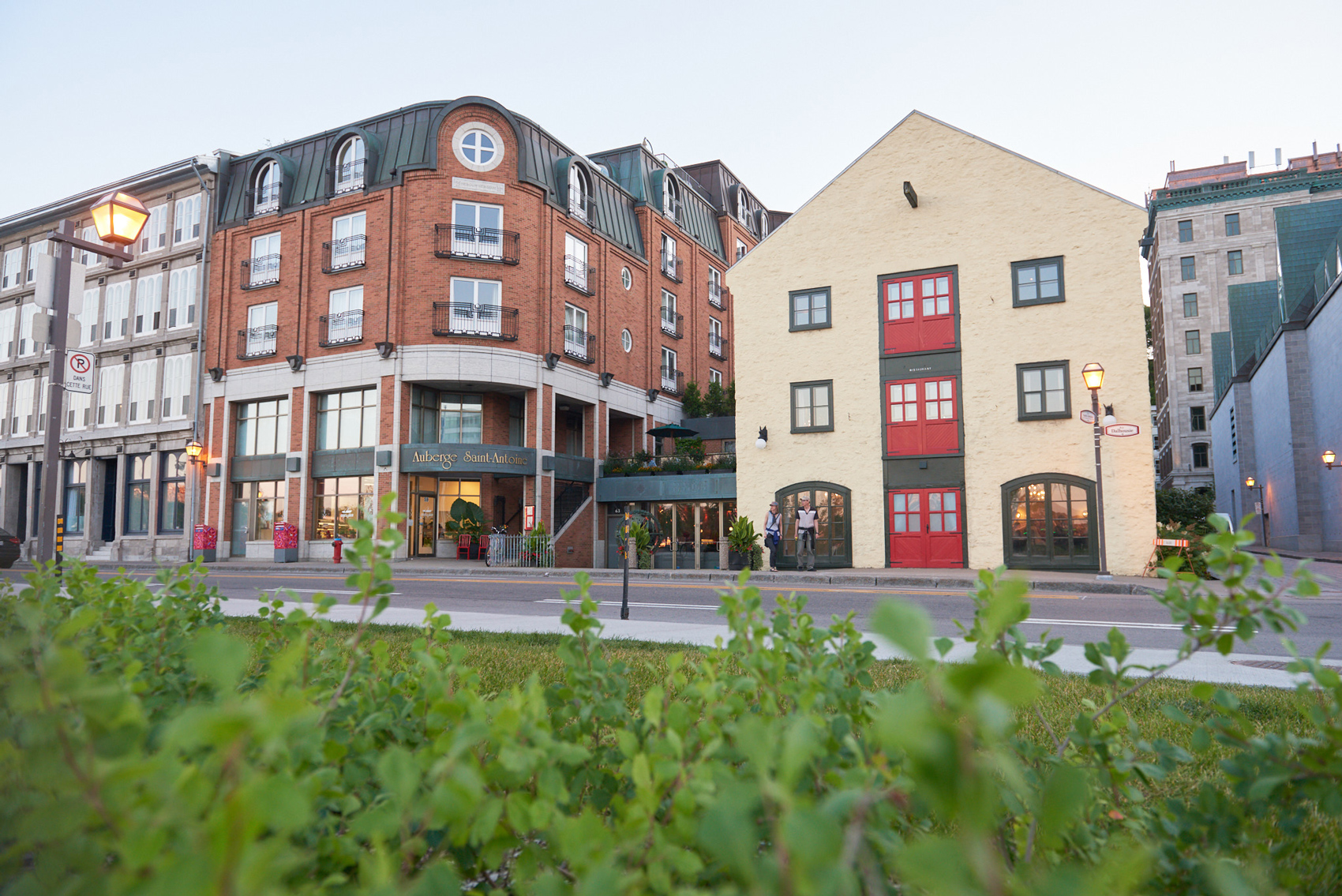 The Auberge Saint-Antoine is where luxury meets history, with high-end amenities complemented by fascinating artifacts from the city’s past.

After a leisurely day of sightseeing and shopping — for hand-crafted jewelry, fur-lined hats and Inuit art — hungry visitors seek out Upper Town’s trendy cafés, restaurants and crêperies, where the fare is delicious and people-watching is an art form. This is a city that invites you to take your time and food is revered. Steak, game and poutine (a delightful mélange of cheese curds, gravy and French fries) will satisfy the heartiest of appetites, while lighter appetites can indulge in fresh-baked croissants at Café-Paillard or goat-cheese pizza at Chez Temporel, a hidden gem among hidden gems. Finally, no visit to Upper Town would be complete without sampling the maple syrup pie at the touristy Aux Anciens Canadiens, located in the oldest house, or “maison,” in Québec, dating back to 1675.

Equally charming and no less historic is Old Québec’s Lower Town, with its enchanting stone houses, colorful murals and fabled shopping district, Quartier du Petit-Champlain, perhaps at its best (and most romantic) when night falls and its shops are brightly illuminated. Here, you will also find some of the best antiquing and art galleries in the city as well as the Place-Royale, a beautiful European-style square, site of the first French settlement in Canada and one of the oldest stone churches in North America, Notre-Dame-des-Victoires.

As for accommodations, the landmark Auberge Saint-Antoine offers unparalleled comfort, luxury and style for its patrons and is the perfect base for exploring Lower Town’s historic Old Port and centuries-old streets. This is one of the premiere boutique hotels in Québec City, while its fabulous farm-to-table restaurant, Chez Muffy, features some of the freshest, most inventive cuisine by land or by sea.

So whether you arrive by car, plane or cruise ship, Old Québec invites you to stroll, dine, browse and explore. What are you waiting for? 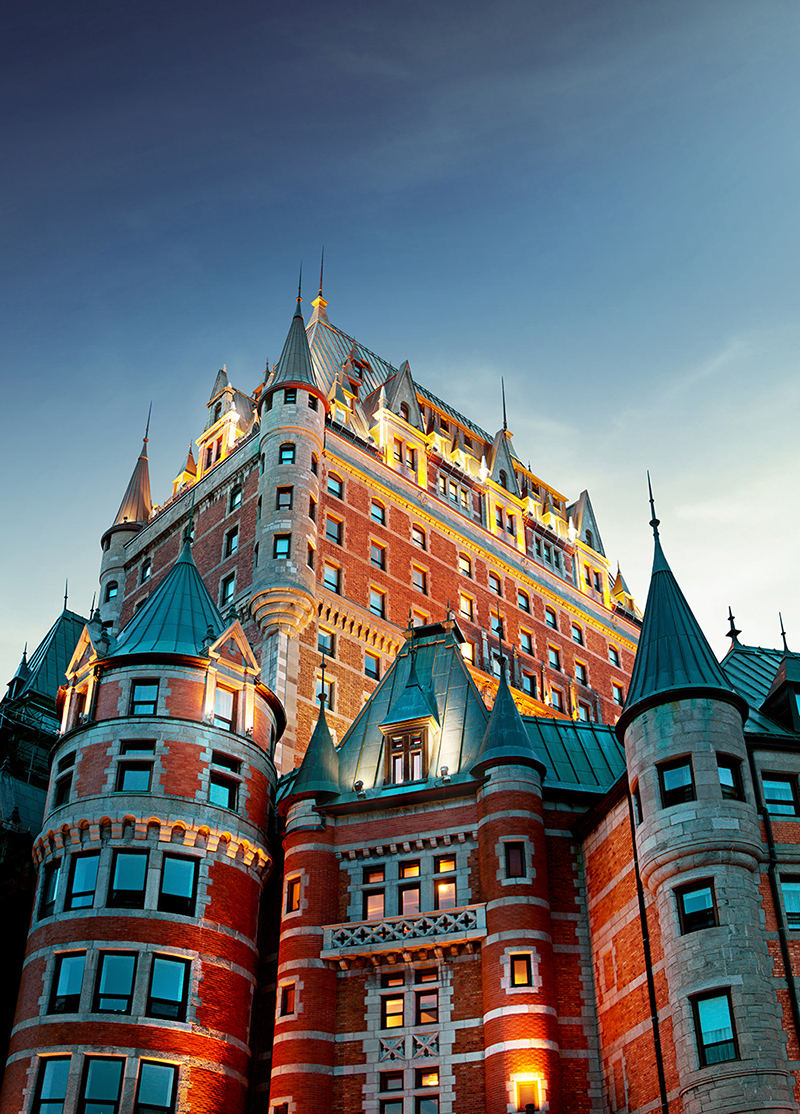 Perched atop the Cap Diamant with magnificent views of the St. Lawrence River, the Fairmont Le Château Frontenac defines the Québec City skyline the same way the Empire State Building distinguishes New York City’s. A single glimpse and you’ll know why this is one of the most photographed hotels in the world.

It’s an awe-inspiring structure by any measure: a Norman-style edifice rising 253 feet, with 613 rooms. Though Fairmont Le Château Frontenac has been an Old Québec icon since 1893, it was early in the 17th century that Samuel de Champlain, the father of New France, built a fort here to defend his new settlement. A railway line, Canadian Pacific, later opened a grand hotel on this picturesque spot. Now, in the wake of a $75-million facelift in 2014, the hotel is more majesterial than ever. From the flower-bedecked courtyard where friendly valets attend to your every need, you enter the spacious lobby painted in French-regal blue and gold with oversize flower arrangements. The main floor has magnificently decorated ceilings, a grand ballroom reportedly inspired by the Hall of Mirrors in Versailles and a glittering double marble staircase that has served as the setting for many weddings.

All of the polished, super comfortable rooms are different and feature sophisticated neutral colors and modern conveniences. If you prefer, you can request the Fairmont Gold experience: book a room on one of the top five floors and enjoy the exclusive Fair- mont Gold Lounge, an honor bar, a private concierge and complimentary canapés. 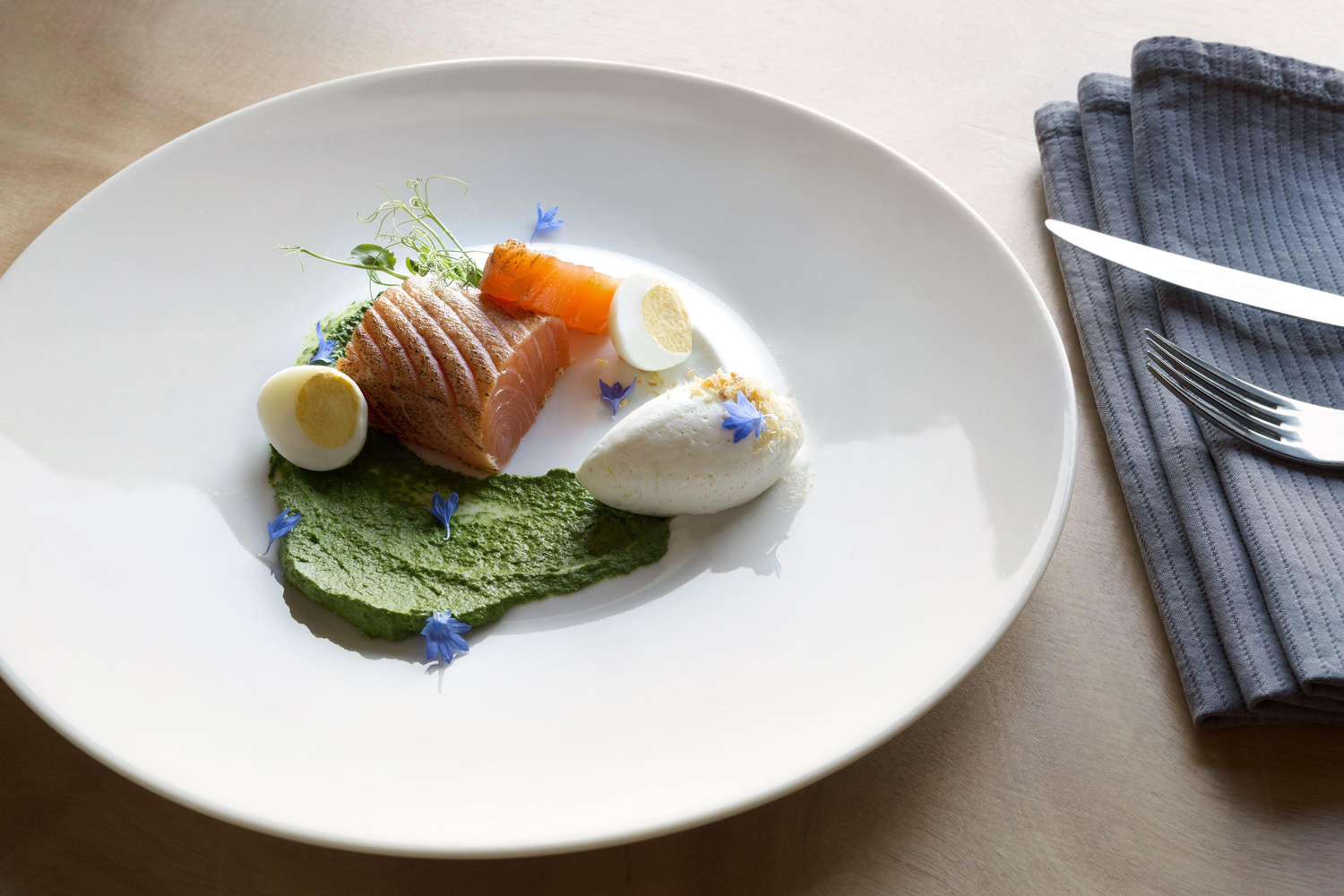 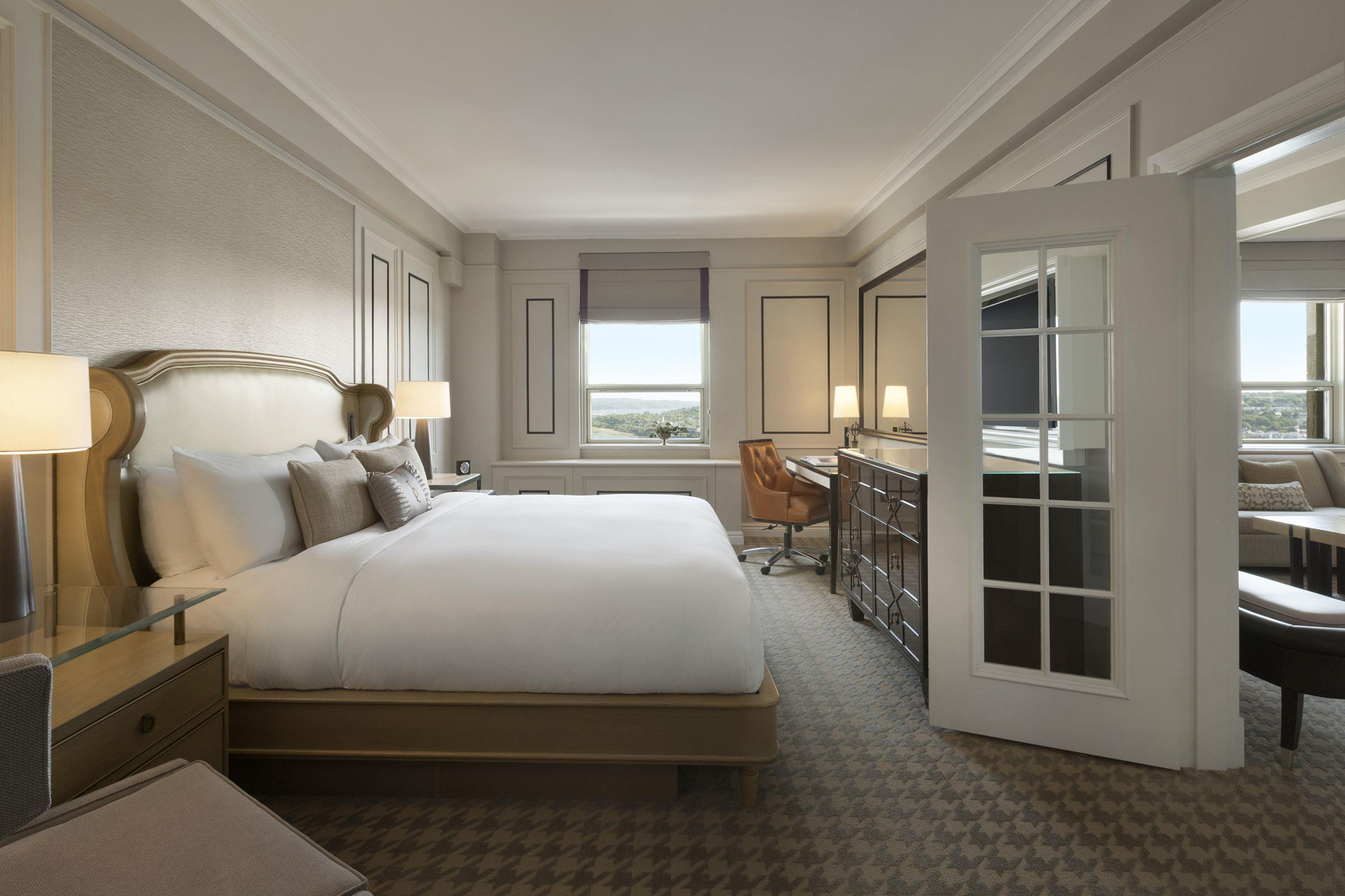 The “hotel food” is anything but that. You have three sumptuous choices. Place Dufferin offers elegant buffets and breakfast menus. Le Sam specializes in bistro cuisine in a family atmosphere, with lunch menu, cheese boards to share, casual happy hours and creative cocktails. For “night on the town” cuisine without having to go out, Le Champlain ranks with the very best of the city’s dining. The chandelier-lit, beautifully decorated restaurant serves high-end French cuisine by noted Québec chef Stéphane Modat.

Among the other splendid attractions are exclusive shopping on the main floor at the Fairmont Boutique; Spa Du Chateau Frontenac, featuring a range of high-end massage therapies, spa facials and body-care treatments; and Club Frontenac, with its 50-foot indoor swimming pool and exercise room.

Outside, the splendors of the most authentically European city in North America await you. The ideal place to start: the Terrasse Dufferin. This riverside boardwalk runs the length of Fairmont Le Château Frontenac, affording grand views of the St. Lawrence and Lower Town. 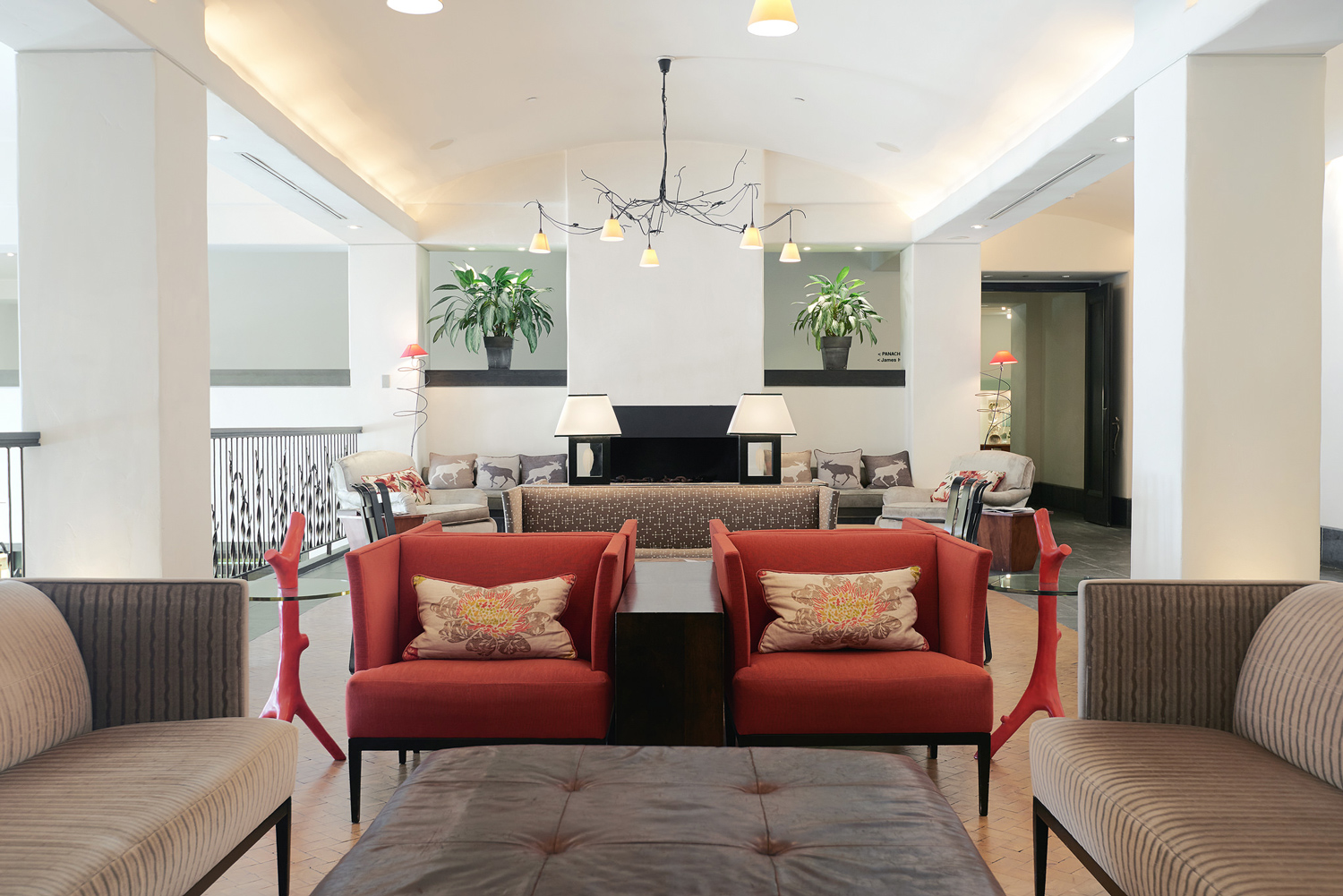 The Auberge Saint-Antoine in Lower Town may be smaller than the nearby Fairmont Le Château Frontenac, but it is no less magnificent and spectacular. This stylish luxury hotel has personality to spare and a quiet, tucked-away intimacy that belies the fact that it’s a short walk from the Quartier du Petit-Champlain, the oldest shopping district in North America. Husband-and-wife directors Dagmar and Guy Lombard don’t miss a beat in offering luxury, boutique hotel accommodations, five-star dining, impeccable service — and a fascinating story to tell.

The Auberge Saint-Antoine lends new meaning to historic hotel. It was constructed on an archaeological site that formerly housed wharves, cannon emplacements, warehouses and relics from the French and English colonial times. A final archaeological dig led to the discovery of several new artifacts. These precious items, some dating to the 1600s, were documented and restored. You will find them in the common areas and guest rooms as well as in the halls, which resemble art galleries. 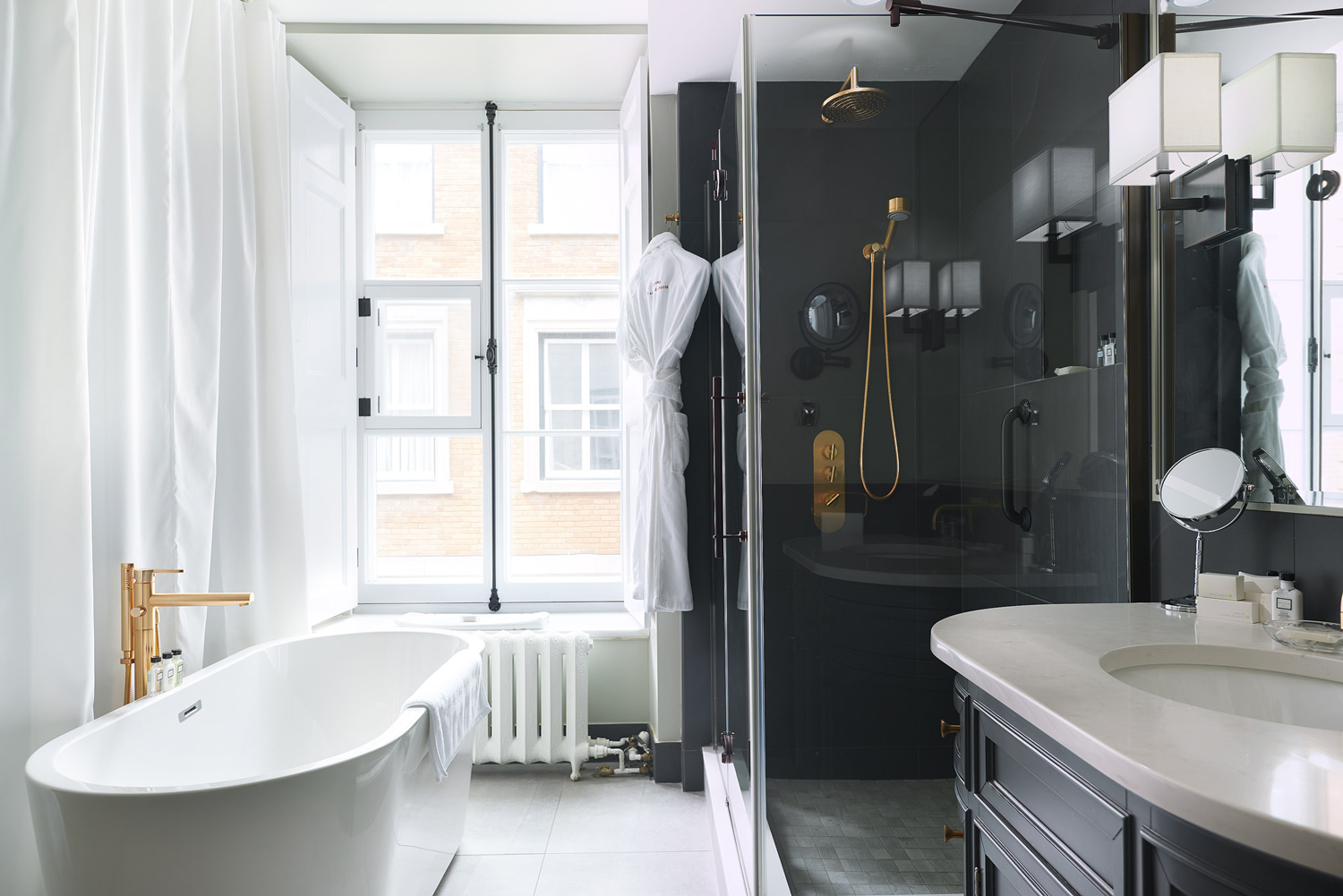 Auberge Saint-Antoine consists of two structures dating back to 1720 and 1822 and the main complex built in 2003. There are 84 rooms and 11 suites, all distinctive and all utterly charming. Beautiful contemporary rooms are located in the main wing, while a smaller wing, Maison Hunt, showcases period designs. Guests will feel pampered with goose down comforters and pillows as well as heated bathroom floors. Onsite amenities include a fit- ness center, sauna and bicycle rentals as well as massage and spa treatments, an onsite cinema and complimentary 20-minute tour through the hotel’s rich archaeological history.

We enjoyed a can’t-get-any-better-than-this dining experience at Chez Muffy, the in-house farm-to-table restaurant set in a refurbished 19th-century warehouse with stone walls and wooden beams. It rightly prides itself on the fresh seasonal produce grown on the hotel’s own farm. On our visit, the seasonal menu included starters such as fresh oysters, whipped goat cheese from the local Cassis et Mélisse Farm, a caramelized cipollini tart and grilled quail.

Main courses included tagliatelles in wild mushroom broth with seasonal vegetables, thyme, garlic flower and fried quail egg; grilled hanger steak with chimchurri, mash potatoes and Henry IV sauce (Mike’s selection); Atlantic Halibut with shoreline herbs salad and violet liqueur sabayon; and a scrumptious grilled half guinea hen with local hot pepper sauce and pressed potatoes (Heidi’s selection). The wine list is diverse and excellent. For dessert, be sure to order the chocolate soufflé when you place your dinner order: it takes 30 minutes to prepare and is out of this world. Note: Chez Muffy’s breakfast buffet is equally spectacular.

The hotel’s other restaurant is Café-Bar. This is an ideal spot to enjoy a light meal in an alcove next to the bar or in the leather easy chairs by the windows. The café boasts one of Québec City’s top cocktail menus. 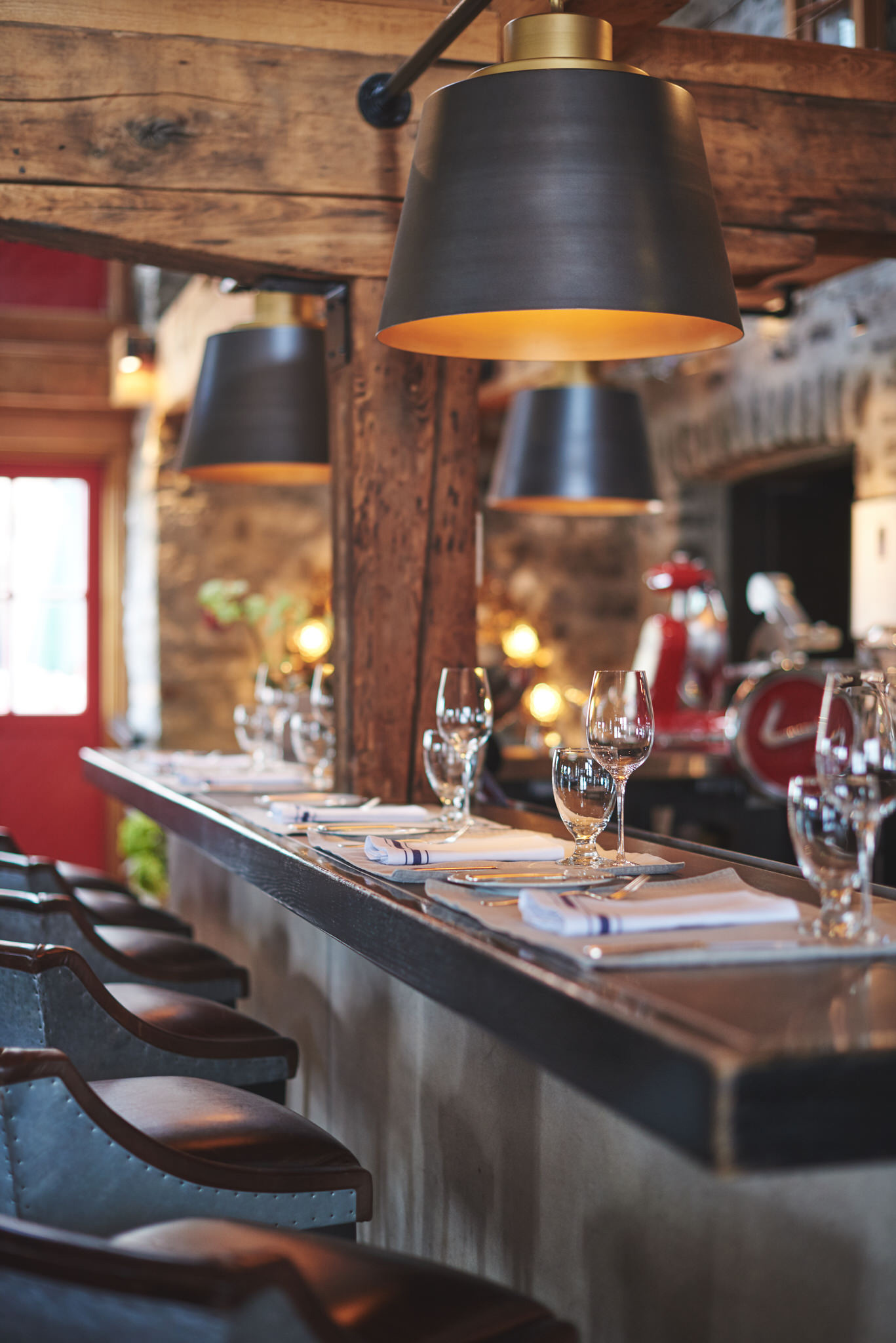